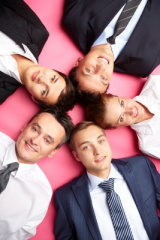 The first time that I heard the term “flat organization,” I was sitting across from a C-Level acquaintance and couldn’t help but picture everyone in the company lined up across a table. Or, I would picture the traditional organizational chart being smashed down from a three-dimensional structure, to a two-dimensional view. Hmmm, it would seem that I would rather be on the outskirts of that smash, so I wouldn’t be the squashed! I was actually thankful that I was not a part of the organization.

Wikipedia describes a flat organization in a pretty straight-forward manner. I know, it is Wikipedia, but hey, I wanted to give it to you in an easy-to-understand format. No insults intended!

The concept, as this gentleman explained it, was that no one was more important than any other person. Ok, sounds good, but, in reality, does it work that way? I mean, the part that he seemed to miss was that it sounded good in his office, but when we walked out of his office, it was evident that everyone seemed to be so afraid of losing their jobs that they would respect his role because of the very title that showed up on his business card, regardless of what his views on management were. So, that squashed flat organization may have the underlings creeping to hide and respect those above them until the whole two-dimensional process became an organization chart again, and everyone bowed down to the authority figures at the top.

At that point I thought the concept of a flat organization sounded good, but, in reality, it may not be possible, certainly not if the “team” were hiding in fear.

I met with Mark Maxwell, currently the President of Prairie Bible College, in Alberta, Canada, a few weeks back. While visiting in his office, the topic of “flat organization” came up and my ears were piqued. I was ready to hear whatever it was he had to say, because it my mind, the concept seemed to be theory only and an impracticality in the real world.

Unlike the academic environment that he finds himself in, now, Mr. Maxwell came from a corporate background in the fast-paced financial industry in Toronto, Ontario, Canada. He was very successful, having been the CEO and then the founder of a firm that did very well, quantified, among other things, by the company’s AUM (assets under management).

Mr. Maxwell seems to have taken the skills he learned in his corporate experience and applied them to the management of the Bible College. Interesting concept, if I do say so, myself!

As I sat in his office, I listened as he described a flat organization and I was very impressed. He described the concept of a team in a way that seemed functional, and his description of management and leadership was not that it was non-existent in some sort of communal-thinking-team-concept, but rather that the person with the expertise for that particular area would step forward for the “on demand” aspect of the leadership. This assumes and presumes that the team understands their own skill set, as well as the skill set and expertise of each of the others. It also assumes that there is respect for each other in the manner that they treat each other.

Success Criteria of the Management Style

It finally made sense. It finally seemed like this type of on-demand, pop-up-as-needed management style could and would work. I pondered it as I listened and wondered why it hadn’t worked as well in the previous environment.

Then it hit me. It is really simple. Are you ready for it? The flat organization only works if it comes down from the “top,” from a spot that doesn’t exist, in theory, because it is flat. Ok, before you ask me what is in my glass and if I realize that sounds like circular logic, stay with me, ok? If the CEO or President is not willing to get in and “get the job done,” then that two-dimensional process starts to become the three-dimensional organization again and the underlings start to fear and bow down to their superiors, no matter what the cost (in some cases). What happens to the organization? Well, it depends on its leadership… Plain and simple, folks.

I don’t personally believe that a flat organizational approach is the right approach for all companies. It works better in the smaller companies and organizations. However, it doesn’t work at all if you have a CEO or President who has a god-complex. And, fortunately for Prairie Bible College, there is no such President, but rather, one who has the right concept of a “flat organization.”

Previous post: The Price of Honesty and Integrity in a Corrupt Financial Situation