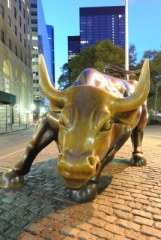 It was the year 2008 and it was the day that the great company, a seeming pillar to the essence of life on Wall Street, ceased to exist. Oh, I know, I am probably giving Bear Stearns more credit than they deserve, as far as historical significance (did I just use the word, “historical” in reference to Bear Stearns?!), but isn’t this similar to an artist, when they die, and their art because even more beautiful when the loss of the artist is fully realized? Just think about the loss of Whitney Houston, recently, and you know what I mean, about an emphasis on loss! Similarly, when I found out my aunt died, I realized I should have called her more often. That is our human nature and we tend to mourn our losses, sometimes more than we appreciate them when they are not a loss.

I realize that Bear Stearns was not a personal as the death of my aunt, and they didn’t hit the core of my soul in the way that Whitney Houston did, with her music and her very self, however, it was personal, and that day was, nonetheless, significant in the fiber of the tapestry called life, being very real.

I was so excited last week, when the Dow Jones industrial Average (DJIA) peaked above 13000. I know, it wasn’t much, but it was significant and it was the first time since 2008, and, well, I felt like a high school cheerleader over the whole thing! That event got me got me reminiscing about the years since and the year 2008.

That morning, I came into work as normal, sat down, ready to meet the day, ready for the market to open. It wasn’t very long before the buzz was through the office. Being in Los Angeles, the traders were rearing to go and ready for the market open in New York, but it wasn’t like the office was full, yet, that early in the morning. It was a surreal moment when you could almost hear a pin drop, yet it seemed to scream loudly in the ear, “Bear Stearns is gone!”

Just the week before, I had called up a friend of mine at Bear Stearns and we were going to get together for lunch. Oh, we had it on our calendar every week but it seemed that both of us were always so busy that we would put it off for the next week and when we did hook up for lunch it seemed to be a trip to the Farmer’s Market, on the designated day when they set up in the area, and eating lunch as we walked back to the office. We were only a couple of floors apart in this building. Our company had a lot of connections with Bear Stearns, as our custodian, and it seemed like we were a younger sibling. So, that morning, of all things that popped into my head, I thought about my friend and our lunch date!

When the reality of what happened finally hit me, I called her up and realized that even she didn’t know the impending news when she left work that Friday before. Being in management at Bear Stearns, I would have thought that she would have had an inkling. That made the whole situation seem even more surreal and the “What is happening to us” foreboding feeling that comes with confusing news and the confusing times that wear about to beset us.

If we fast forward, we got a little accustomed to news like this, with the Lehman Brothers and other institutions and newsworthy events in the financial and economic arena. I guess you could say we became a little numb to it, notwithstanding a surge of emotion during the revelation of the Madoff Ponzi scheme. It seemed that all of us would breathe a sigh of relief that it “wasn’t us” each morning when market would open and hope that was still the case tomorrow.

Hope For the Future?

What about hope? What about the future? Well, time will tell. There certainly are different theories, but, looking back, there wasn’t much we could do to change it and, as they say, hindsight is always 20/20. But, I am a person with hope and like to think it can’t get much worse – can it?

Am I excited about the market improvements last week? You can better your bottom dollar! But, that feeling is tempered with memories (after I finish jumping for joy!)…

I will never forget the day that Bear Stearns took its last breath and we entered into uncertain times in our economy… I hope for a bright tomorrow.

Next post: Bullish vs Bearish Market – Learning the Basics